Advent is the period of anticipation roughly between Thanksgiving and Christmas leading up to the celebration of Jesus' birth. Families traditionally use their Advent candle wreaths as centerpieces and light a specific number of candles each week during dinner followed by a meaningful reading.

The Four Sundays of Advent

To figure out the four Sundays of Advent, count back the four Sundays before Christmas. Advent begins on that first Sunday which usually is sometime between November 27th and December 3rd. Many churches provide their congregants with an Advent calendar to help them track the days. Some of these calendars can be simple paper sheets and others can be quite elaborate.

The four Advent candles represent the four weeks of Advent and should be lit in a specific order. All four candles are placed in a wreath with three of one color, usually purple or violet, and one of a single color, usually pink or rose or in some traditions, white. The candles are placed in order with the single color candle placed third in order. Some people will also place a white candle in the middle of the wreath.

Each candle has a specific meaning related to the birth of Christ.

The first purple, or violet candle, is the Prophecy Candle symbolizes hope and God's forgiveness toward man. It also can symbolize the expectation of the coming of the Messiah.

The second purple or violet candle symbolizes faith and reminds Catholics about the experience of Joseph and Mary in the city of Bethlehem.

The third candle which is pink or rose, represents Gaudette Sunday and the joy that the birth of Christ brought to the world. Traditionally, on Gaudette Sunday one takes a break from Advent fasting to experience the joy of the day. The Shepherd's candle is sometimes white instead of rose or pink.

The last purple candle is the Angel's Candle and represents the peace and justice that the angels and Christ brings to the world. It also can represent purity.

If a white candle in the middle of the wreath is included, this candle is lit on Christmas Eve or Christmas Day and represents Christ and purity. The Christ Candle is lit every night until the Feast of the Epiphany, which is twelve days from Christmas. 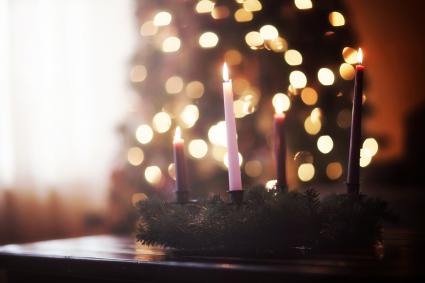 The Colors of Advent

Advent candle meaning is slightly different in each faith because the colors of the candles can be different and the overall meaning of the event varies. 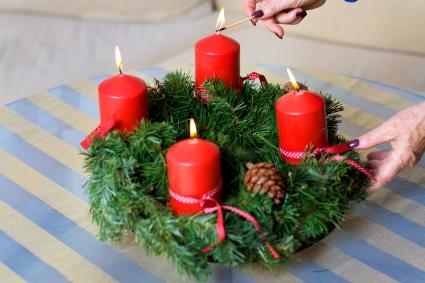 Advent wreaths and candles are more than another holiday decoration. These symbolic items represent the beliefs of different religions in a way that recognizes why they are celebrating Christmas.

Advent wreaths are often used by families in the home, not necessarily in a church. These personal ceremonies speak to each family member's beliefs and values about the holiday season.