The question of how many candles are on a menorah has a couple of different answers, depending on what the menorah is being used for. Most people tend to know of the menorah as a symbol of the Jewish holiday Hanukkah, but there are other meanings and uses for these simple yet lovely candle holders.

The menorah is a symbol of the Jewish faith and is recorded in the Bible as first appearing in the days of Moses. According to the Bible, Moses was shown the menorah on the mountain. The first menorah was made from a single piece of gold and presented for use in the first Temple of Jerusalem. Throughout history, the menorah has been used as a symbol of worship, and has been adapted along the way to include the Hanukkah Menorah.

How Many Candles Are on a Menorah?

While there are other variations, the most common types of menorahs have seven or nine candles. The number of candles is determined by the purpose that the menorah is to be used.

The first menorah consisted of six curved branches and one center shaft. These candles are all level, and lit together. The menorah and its lighted candles can represent several things, including:

The image of a menorah appears on many artifacts, including ancient coins and gravestones. 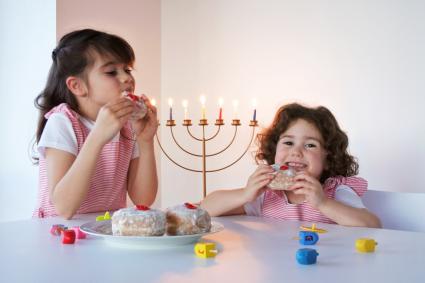 When asking how many candles are on a menorah, the most common answer is nine. This is because today, the menorah is most often associated with Hanukkah, the Jewish celebration of the seven-day battle against the Greek-Syrians in which the Jews reclaimed their Second Temple. 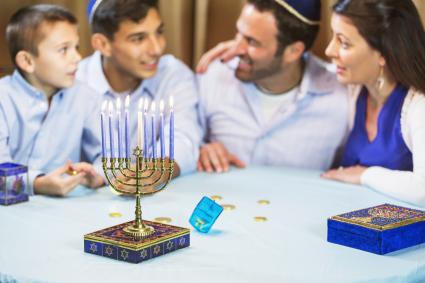 According to tradition, the temple menorah was to remain lit at all times, but only a single days' worth of pure oil was found inside the destroyed temple to keep the menorah lit. However, during the reclaiming ceremonies, the oil lasted for eight days, at which time new oil could be purchased. This is seen as a miracle, and the reason for the number of candles on the Hanukkah menorah.

Eight of the Hanukkah menorah's candles are level with each other, to symbolize the eight days that the oil lasted. The ninth candle which is either elevated or shorter than the others, is used to light the other eight candles, and referred to as the Shamash.

The lighting of the menorah is the most important part of the Jewish Hanukkah celebration. The menorah should be placed in an uncovered window, as part of the purpose for the candles is to spread the word of the miracles the menorah symbolizes. Many families choose to light their menorahs outdoors, just to the left of the entrance of the home.

Candles in a menorah are most commonly white, but any color can be used. Hanukkah lasts for eight days, and each night one lit candle is added to the menorah. So, on the first night, the first candle is lit using the ninth candle, the Shamash (attendant). The next night, two candles are lit. This continues until the eighth night, when all of the candles are burning bright.

Traditions and customs can vary from household to household, but the basic steps for lighting the menorah are:

Tips and Facts for Lighting a Hanukkah Menorah

There are several tips that can help you enjoy the lighting of a Hanukkah menorah. Keep in mind that the lighting of menorah is a religious ceremony and should be approached with reverence.

Who Can Light a Menorah?

Family traditions dictate who lights the menorah. This is often the head of the household. A woman, man or child can do the honors. Some families practice each member having a personal menorah that each one lights.

No matter if a menorah has seven or nine candles, it is a lovely symbol of religious freedom, associated with deep meaning and tradition. Menorahs can be lit by every member of a household, with several of them burning at the same time.

1
Comments
© 2006-2021 LoveToKnow, Corp., except where otherwise noted. All Rights Reserved.
Resources, Advice & Tips for Covid-19
Read More
How Many Candles Are on a Menorah?