The meanings and symbolism of Kwanzaa candles reflect the African American and Pan-African holiday. There are seven candles placed in the official candle holder, kinara, which supports the mishumaa saba (seven candles). Each candle represents one of the seven core principles (nguzo saba) of Kawaida philosophy.

Kwanzaa is a celebration of family, community and culture. There are three official Kwanzaa colors: black, red, and green. There are seven candles: one black candle, three red candles, and three green candles. Each candle represents one of the seven principles guiding Kwanzaa. These are placed in the mishumaa saba in a specific order. Each candle is lit on a specific day of the Kwanzaa seven-day celebration. 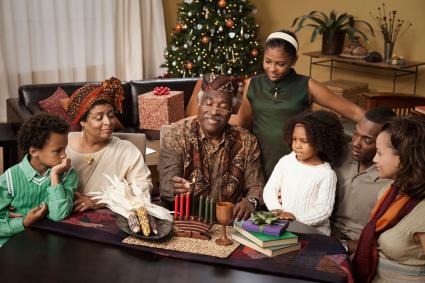 The principle that the black candle represents is the concept of unity. The day one (Umoja) focus is on the unity of family, community, nation, and race.

There are three red candles, each representing a separate principle. These candles are placed to the left of the black candle in the mishumaa sava. These three principles include:

There are three green candles, each representing a specific principle. These candles are placed to the right of the black candles and the last ones lit.

According to the Official Kwanzaa Website, the proper order of lighting the Kinara is to:

The goal is to light the candles after the black one by moving from left to right when facing the Kinara. The Official Kwanzaa website explains, "This procedure is to indicate that the people come first, then the struggle and then the hope that comes from the struggle."

Different Versions of Lighting the Kinara

Where to Place the Kinara

The kinara (kee-NAH-rah) has a special designated place during Kwanzaa. A table is set at the beginning of the holiday activities on day one. 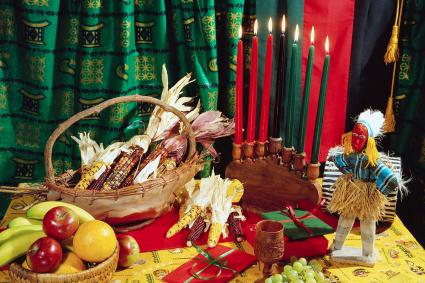 Type of Candles to Use

The candles selected for the majority of Kwanzaa celebrations are tapers. The most popular kinaras support taper candles. That doesn't mean you're limited to only using taper candles.

The overall lighting of the Kinara and the meaning each candle holds remains the same from one family to another. However, in keeping with the spirit of Kwanzaa, families are encouraged to make the celebration their own. Each family should decide what type of ceremonial practices they wish for the lighting of the Kinara. There are several ways they do this:

Other Ways to Celebrate Kwanzaa

Some other ways you can celebrate Kwanzaa is to serve specific foods, such as greens, yams, and other traditional foods. Some families play games or make Kwanzaa related crafts as part of their celebration.

Understanding the Symbolism Behind Kwanzaa Candles

You can receive greater insight and appreciate for the Kwanzaa celebration when you know the candle meanings and symbolisms. Once you know what each candle represents, you can pray and/or meditate on its meaning the day you light it.