Candle flame meanings are all about the way the flame burns. The flame becomes the transformative element to aid in manifesting your intent. The types of flame have traditional meanings that indicate how successful you are.

Most candle meanings come from ancient cultures and practices, such as the Romans, Babylonians, Greeks, and Celts. Over the centuries, various religions, such as Hoodoo rootwork espoused and added to the candle divination meanings. In fact, many of the candle flame meanings were adopted and incorporated into numerous practices, including Wicca.

Not all candles burn the same colors. Sometimes, the flame can be blue, red or yellow. 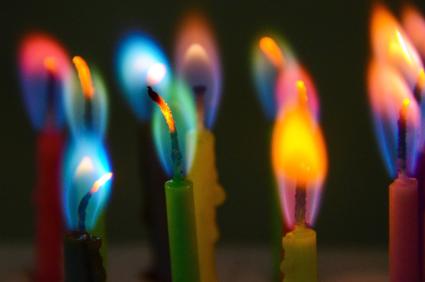 According to Grove and Grotto's The Candle Signs Dictionary, a blue flame symbolizes the presence of a spirit. This can be an angel, fairy or other highly evolved spiritual entity.

Grove and Grotto states when a flame burns red or yellow that mundane energy, not spiritual, is fueling the burn and can also be powerful.

This flame bodes well for candle magic or spells. It is strong enough to push through any obstacles and tall enough to reach the height of goals and intentions. 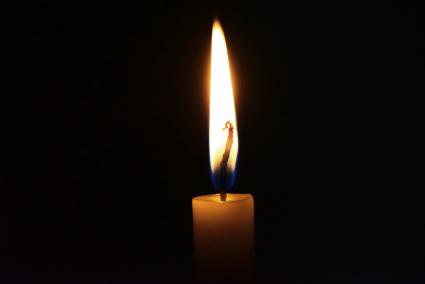 Grove and Gotto advise that a sporadically burning flame that dances about is indicative of a spell that has the power to work, but not without possible problems. The interpretation depends on other factors, such as the flame being tall or short. It could mean resistance; the higher the flame jumps, the greater the resistance, according to Spiritualists at Original Botanica. 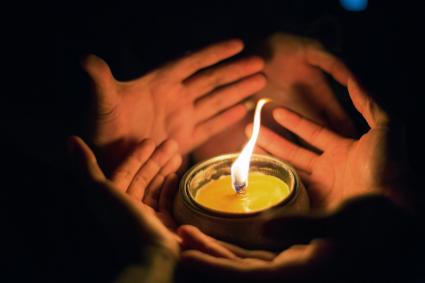 Some believe that a flickering candle flame is announcing the arrival of a spirit. Another traditional meaning is that strong, almost raw emotions are involved and can lead to arguments. In A Little Book of Candle Magic, author DJ Conway explains that a flickering or sputtering candle's communications can be interpreted by the four compass points. 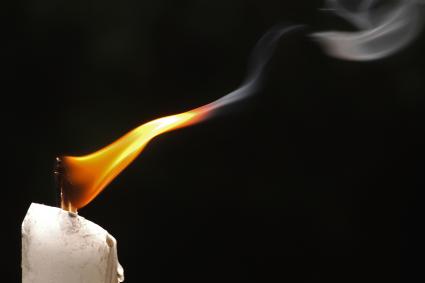 Conway also writes that that a flame that sputters and crackles can indicate a form of communication. The intensity of both determines the messaging. Loud crackling and frequent sputtering warns of arguments.

A noisy and continuous sputtering flame may indicate that someone or other forces oppose you. You can light additional candles to provide greater energy. If the sputtering continues, it's best to end your work and try another time.

A flame that produces a popping sound is considered another form of negative communication. The type of communication is determined by the reason you're burning the candle and what it represents. For example, if you're conducting a protection spell, many believe the popping sound means someone with bad intentions toward you is talking about you or planning something against you or planning to harm you.

In Coventry Magic with Candles, Oils, and Herbs, author Jacki Smith discusses candles that burn with more than one flame. Aside from the natural physical causes, Smith says that the traditional interpretation of two flames burning from one wick involves two energies or energy that is cut in half.

The most common interpretation for dual flames is the presence of two energies that are either working together or in opposition of each other. This is determined by the kind of spell being worked, such as a protection spell or a hexing spell. The former would indicate the targeted person is reflecting the hexing magic back to the spell worker, while the latter would be a sign that the two have joined forces in the positive intent of protection.

According to Candle Magic for Beginners: The Simplest Magic You Can Do by Richard Webster, when a flame self-extinguishes, it puts an end to your work. This can also mean your prayer or spell was received by the spirit world. It can indicate that your spell is opposed by either the spirit realm or an individual. 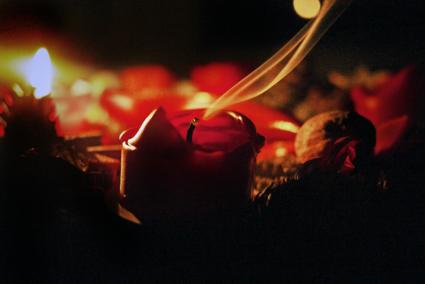 Grove and Grotto state that a low flame doesn't have the energy to push the intent into completion. If a low flame is steady, you're being reminded to be diligent and expect a good result. If the flame weakens, the spell won't work. If it gradually begins to grow taller and stronger, the energy to bring your spell to fruition has been released.

Webster writes that a weak flame will produce weak results. The time simply isn't right. It also can indicate the spell is wrong, especially if it flickers. It might mean that your timing is off, or your spell needs more work before it can be powerful enough to complete your intent. Regardless of the reason, a short weak flame means there isn't enough energy to bring your intent into reality. Jacki Smith advises the flame should be extinguished. You can try to strengthen your spell another time.

Conway states this kind of burn is considered a positive indication the candle is doing its job. There are strong supportive energies behind the intent.

There are two different types of fast burning candles. Each has a specific meaning that can help you to assess the success of your spellwork.

A candle that burns unevenly, with one side melting down faster than the other indicates your spell wasn't properly grounded before you cast it. You'll need to cast the spell another time. If on your second try, the candle once more burns fast and unevenly, stop your work and try your spell at a later time.

A candle that burns faster than normal but is an even burn can be a good omen as long as the candle doesn't have any other unusual attributes, such as sputtering or popping. When a candle seems to burn out of control, it can be a symptom that something within your work isn't correct. You should stop and repeat your spellwork, paying close attention to each step to ensure it's correct. If your second attempt results in the candle burning evenly but fast, consider the spell successful.

There are traditional standard meanings for most candle flame behaviors. You can use these to interpret if your intent for lighting the candle has been successful.